"Mosquito Dragon" is the 4th episode of Season 3 of Wild Kratts, originally airing on PBS Kids on July 25, 2014. Overall, it is the 70th episode of the series. The episode was written and directed by Chris Kratt. On July 21, 2014, “Crocogator Contest”, along with “Mosquito Dragon”, first aired in a Wild Kratts special called Swamp Things.

In this episode, after they get bitten by mosquitoes, the Wild Kratts decide to find out the reason why mosquitoes suck blood. Meanwhile, Zach Varmitech comes up with another villainous plan, this time by using "Mosquito-bots" to hack into the Tortuga's main computers.

The episode begins with a live-action segment. The Kratt brothers travel around the cypress swamps while talking about mosquitoes. Afterward, they ask their "What if?" question, and the show transitions into the cartoon segment.

The Wild Kratts are traveling across a river in the cypress swamps of Florida when they all get stung by mosquitoes. Chris stops the hovercraft and Martin begins digging through his backpack to find mosquito repellant. However, the other Wild Kratts members are too desperate to wait for Martin to dig past the seemingly endless stream of junk coming out of his backpack, so they return to the Tortuga HQ. This incident inspires the Kratt brothers to find out why mosquitoes suck blood. Meanwhile, Zach Varmitech attempts to hack into the computers of the Tortuga, when a mosquito bites him. Knowing that mosquitoes steal blood, Zach gets the idea to make mosquito-inspired robots to steal data stored on the Tortuga's computers.

The Kratt brothers miniaturize and enter the water, where they find mosquito larvae floating on the surface and eating algae. They call Aviva and tell her that blood does not play a role in the mosquito's larva stage. Then a mysterious creature swoops past them, eats a mosquito larva, and disappears into the water. Meanwhile, Aviva finds out that the female mosquitoes are the ones that drink blood (male mosquitoes drink plant sap). Aviva gets into the hovercraft and chases a mosquito that recently drank blood. She bumps into Martin, who rides along with her. Chris, now alone, gets cornered up a branch by the "swamp monster".

Aviva launches Martin up into the air so he can ride the mosquito, but he instead falls into a puddle in a cardinal plant. The mosquito then starts laying eggs on the surface of the puddle. Martin scans the back of its abdomen and finds out that the blood the mosquito drank is used to make eggs – the reason why mosquitoes suck blood.

Chris finds out the swamp monster is a dragonfly nymph after a dragonfly emerges from its body. Later, Koki informs Martin and Aviva that a storm is heading their way. But it's not a storm, it's a swarm. Up in the sky, the Kratt brothers see Zach Varmitech's swarm of "Mosquito-bots" flying towards the Tortuga. Martin is able to destroy one, but there is a whole swarm that he has to destroy and he doesn't know what the Mosquito-bots are built for. Aviva scans it and tells Martin that Zach is trying to steal all the information from every computer in the Tortuga. Martin calls Koki and Jimmy and tells them to escape the swarm of Mosquito-bots, and Jimmy, who is frightened, starts the Tortuga and flies it away from the swarm. Chris rides the dragonfly as it flies and simultaneously names it Swamp Dragon, who starts eating Mosquito-bots as if they were real mosquitoes. Martin activates his Dragonfly Creature Power Suit to aid Chris in taking down the swarm. About the time the Mosquito-bot swarm completely surrounds the Tortuga, Zach arrives in his jet. In spite of the success of his Mosquito-bots, the mosquito-bots are programmed to sense warm air emitted from aircraft engines, and because the engines of Zach's jet are "hotter" than that of the Tortuga's, the mosquito-bots stop following the Tortuga and instead follow Zach's jet. In the end, the Wild Kratts summarize their adventure as they resume traveling down the river by hovercraft. Koki and Jimmy start liking mosquitoes, realizing what mosquitoes steal blood for.

The show transitions into the concluding live action segment. The Kratt brothers use nets to sift through the bottom of a creek, taking a close look at the creatures that they have gathered. Afterward, they conclude the episode by saying "Keep on creature adventuring; we'll see you on the creature trail!"

Note: Featured animals are in bold.

Chris and Swamp Dragon, the dragonfly

From left to right: Jimmy (agonized by mosquitoes), Aviva (sitting), Chris (behind the bench Aviva and Koki are sitting on), Koki (sitting) and Martin (only partially visible)

Aviva is asking Chris and Martin for mosquito repellant.

The mysterious creature has just swum in front of Chris and Martin.

The creature is stealing one of the mosquito larvae.

Chris is hoping that the "swamp monster" (a dragonfly nymph) doesn't eat him.

Aviva on the hovercraft

She is wondering why these mosquitoes drink plant sap.

The "swamp monster" is appearing in the water.

Aviva on the hovercraft, again 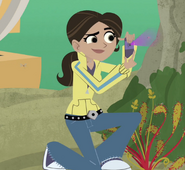 Aviva is scanning the sap-drinking mosquitoes.

This mosquito is a male.

Aviva isn't noticing miniaturized Chris and Martin who are threatened to get overrun by the hovercraft.

Aviva is noticing Martin onto her Creature Pod.

Chris and Martin in front of an alligator

Chris and Martin are interested in a mosquito on Chris' arm.

Martin is looking for mosquito repellant in his backpack.

He is distracted by a gewgaw/geegaw.

Koki and Jimmy inside their mosquito protection suits

Unjustly, Jimmy has just lost his mosquito protection suit, so he is agonized by mosquitoes again.
Masquito Dragon.Wild Kratts.033.png
Chris, riding Swamp Dragon, and Martin in Dragonfly Power on the Large Screen

Jimmy is freaked out.

The other Wild Kratts members are wanting that Jimmy calms down.

Chris is watching a mosquito on his arm.

"Why do they want my blood anyway?", Aviva and Koki are wanting to know.

Standard of Chris and Martin

The access to the Tortuga's data by Zach is denied by the security systems of it.

Aviva and Koki are pleased because they aren't surrounded by mosquitoes now.

Jimmy is taking a bath in skin lotion.

One mosquito larva is chewing on Chris' Creature Pod.

Aviva is understanding this.

Chris and Martin are looking cute in this picture.

Chris thinks it's a new species!

Martin is holding Chris back.

Chris is reaching out his arm.

But Martin is pulling Chris back.

Martin is telling Chris that the "swamp monster" will eat them.

Martin is telling to Chris: "Besides, we're on a Mission, remember."

Aviva is holding her Creature Pod.

Aviva is scanning female mosquitoes in her surroundings, …

… in the surroundings of a raccoon, …

… in the surroundings of a black bear …

… and in the surroundings of a deer.

Chris and Martin are exhausted.

Martin's underwater mask is falling off his face.

Martin is falling down.

Martin is watching a female mosquito laying eggs in the puddle of a cardinal plant.

Aviva and Martin on the location map on the Large Monitor

Martin is holding onto a Mosquito-bot to destroy it.

Swamp Dragon is trying to eat a Mosquito-bot.

Martin is crushing a Mosquito-bot at the Tortuga's outer shell.

Koki is warning Chris and Martin: "Look out for Zach's plane!"

Miniaturized Martin, holding a mosquito, right of Koki, who is inside her mosquito protection suit.