Martin holding a jar of jelly, a jar of chocolate spread, and a jar of sprinkles

The Kratt brothers are ready to head out.

An African bee on Chris's nose

Chris after getting stung by the bee

The Kratt brothers wave their arms in excitement.

Chris and a silhouette of an African bee

Martin teasing Chris by pretending to eat him

Martin bumping into a lion

The Kratt brothers after landing on their faces

The Kratt brothers wheeze after smelling the stench of a honey badger.

The Kratt brothers continue to wheeze after smelling the stench of a honey badger.

A honey badger about to be netted by Gourmand

Martin pleading Chris not to sneeze

Chris in Honey Badger and Martin in Honey Guide Power

Chris pinned to the wall by Gourmand's pastry dough

Chris and Aviva pinned to the wall by Gourmand's pastry dough

Martin coming up with a plan to stop Gourmand 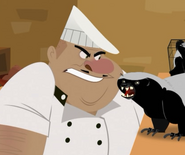 Gourmand growling at a honey badger

Honey badgers lick dough off of Chris and Aviva.
Add a photo to this gallery
Retrieved from "https://wildkratts.fandom.com/wiki/Honey_Seekers/Gallery?oldid=58599"
Community content is available under CC-BY-SA unless otherwise noted.